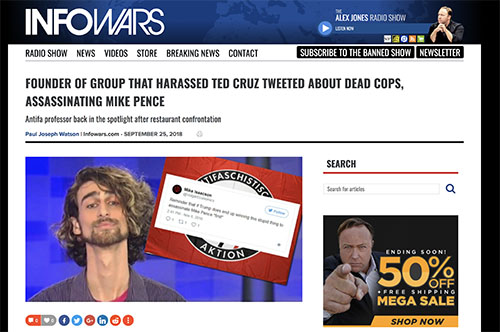 In an exclusive interview with Infowars, Gab founder Andrew Torba lashed out at the media’s attempt to blame him and the free speech platform he created for yesterday’s horrific Synagogue shooting.

Prior to the the deadly attack, gunman Robert Bowers posted on Gab, “I can’t sit by and watch my people get slaughtered. Screw your optics. I’m going in.”

The killer also had made a number of anti-Semitic posts on Gab in which he made clear his hatred for Jewish people and his opposition to Donald Trump.

Within hours of the shooting, the media rushed to blame Gab, leading to the site being banned by Paypal and Torba being roundly demonized as an enabler of terrorism.

Torba made it clear that he had been helping the Department of Justice and the FBI by archiving Bowers’ posts, providing them with “concrete evidence for a motive that they can use in a case to seek justice against this awful monster.”

“Gab did not kill anybody, no social media post ever killed anybody, the only person responsible here is the individual and I think it’s disgusting that I’m being attacked, my face is being put up next to this guy as if I’m the terrorist, we’re receiving death threats,” said Torba.

“Every single day we see thousands of tweets calling for people to kill the president of the United States and this is allowed, we see live streamed murders on Facebook, we see criminal activity in very high volumes across all of the mainstream social media platforms, including ISIS terror cells and pedophiles preying on children and nobody is calling for Facebook to be shut down, nobody is calling for Twitter to be shut down,” said Torba, adding, “So to take the disgusting actions of one man and shut down an entire platform….demonize me and make me out to be some form of terrorist for allowing free expression and individual liberty online for all people is absurd.”

As many people have pointed out, Louis Farrakhan tweeted almost identical anti-Semitism on Twitter, yet Twitter has refused to ban him, nor does Twitter take any of the blame for his bigotry and racism.

Louis Farrakhan has tweeted THE EXACT SAME rhetoric the Pittsburgh shooter had in their GAB profile. pic.twitter.com/kaqkc2WNCA

Mail bomber Cesar Sayoc Jr. also made numerous violent threats on Twitter which were not removed or reported to authorities.

A statement released by Gab emphasised the fact that individuals aren to blame for atrocities, not social media platforms on which they post.

“We refuse to be defined by the media’s narratives about Gab and our community. Gab’s mission is very simple: to defend free expression and individual liberty online for all people. Social media often brings out the best and the worst of humanity. From live streamed murders on Facebook, to threats of violence by bombing suspect Cesar Sayoc Jr. that went unaddressed by Twitter, and more. Criminals and criminal behavior exist on every social media platform.”