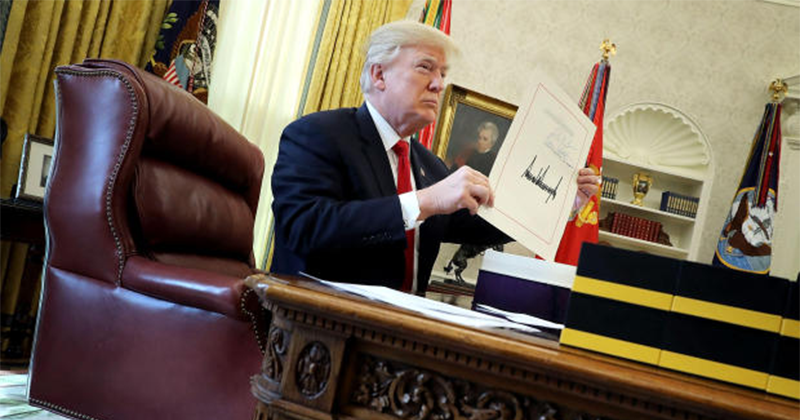 Despite the Establishment swearing that Trump’s tax cuts will destroy the middle class and kill Americans, the global public is already feeling the bill’s positive effects for American workers.

For months all we’ve heard from the anti-American media is that this bill will result in unprecedented damage to the financial prosperity of the nation’s middle-class, meanwhile the rich will continue to get richer with the extra money this bill would give them; some have even claimed that this bill is “akin to rape”.

Obama claimed Trump couldn’t fix the economy without a magic wand, and yet the stock market saw a boom the very night of Trump’s election and thousands of jobs began to return before he even took office.

In the same manner, before the new tax bill was signed into law the American people are already seeing the benefits.

Companies such as AT&T and Comcast have stated they will invest $1 billion and over $50 billion into their infrastructure respectively, as well as both companies committing to $1,000 bonuses to hundreds of thousands of non-executive employees.

Boeing has dedicated $300 million to workers in the form of training, facilities, and a program incentivizing charitable giving.

Wells Fargo has claimed the bank will increase its charitable giving by 40%, as well as raise its hourly pay rate to $15/hr.

One might expect that after progressive crusades such as “#FightFor15” the Left would be praising these tax cuts for their instrumental effect in raising worker income, but once again they’ve made it evident that ideology is more important than both cause and outcome.

Not only are US based companies putting more money into their workers, but foreign nations are becoming increasingly nervous that their own businesses and investors will be drawn to the US’s newly reduced corporate tax rate of 21%.

According to the German news publication ‘Handelsblatt’, Germans have reason to fear investors will shift money out of Europe and into the United States.

Specifically, the report from Handelsblatt states:

“Clemens Fuest, who heads the Ifo economic think tank, also said he believed German business would suffer. “Investments and jobs will migrate to the US,” he said.”

The Australian Treasurer Scott Morrison fears that the country will take up to a 1% hit to its GDP unless they pass a similar cut to taxes.

“The Trump tax cuts are coming. If we fail to respond, they will take Australian jobs, investment and wages with them.”

It becomes increasingly evident that despite the Globalist attempts to stifle growth, Trump has lit a fire in the American economy and that fire is spreading so far and wide that the even the global community is forced to look for true prosperity.

It is more important than ever that the American public supports the President as well as pro-America media in order to fight back against the lying Globalist institutions that are finally on the run.