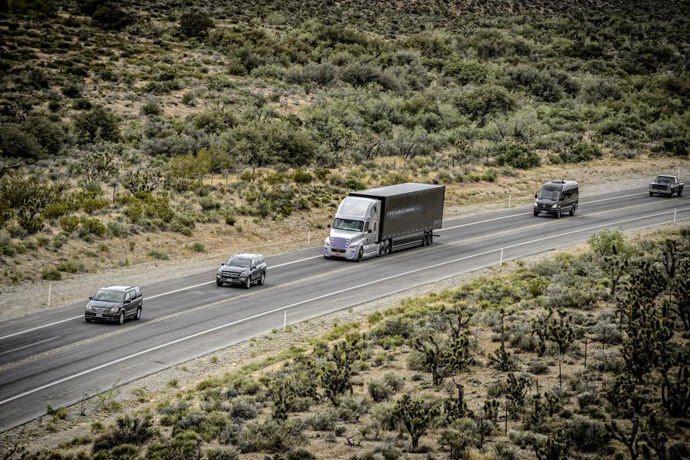 If you hanker to be a driver of a brand-new Daimler truck, there’s bad news for you: the job doesn’t exist anymore. The Freightliner Inspiration, the world’s first self-driving semi-truck, is now undergoing testing under real road conditions in Nevada.

It’s not yet on sale, however. The US state has certified two Freightliner Inspiration trucks to mix with regular traffic on public roads.

“Today is history,” Nevada Governor Brian Sandoval said Tuesday, posing along with Daimler board member Wolfgang Bernhard with a red license plate for the self-driving truck at an event at the Las Vegas Motor Speedway.

Prior to the current testing, the self-driving truck covered over 16,000 kilometers on a test circuit in Germany.

Daimler, the world’s biggest truck maker, says self-driving trucks will help freight companies save money on fuel and boost safety on the roads. In 2014 Daimler’s rival, Google, announced the creation of self-driving cars, without steering wheel or pedals. It’s hoped that automation in freight transportation has as much potential as driverless cars.

The truck maker says that autonomous vehicles will be connected to their environment and other road users to such an extent that they will avoid areas with heavy traffic, reducing traffic jams on highways.

Despite its weight, the Inspiration truck is a smart vehicle. It maintains a safe distance from other vehicles on the highway and doesn’t attempt to pass slower cars. A radar unit centered in the front bumper of the trailblazing truck monitors the road both at close and long range. The long-range sensor goes out to about 250 meters, according to Daimler. The area in front of the truck is also monitored by a stereo camera (which has a range of about 100 meters) mounted above the dashboard. The steering gear installed in the Inspiration has been road-tested in Mercedes-Benz trucks since 2011.

Daimler says the Inspiration will “significantly change” the job of truckers, creating career opportunities for drivers to become what the company calls “transport managers.” Autonomous driving will also relieve drivers from long-distance routes.

“Autonomous driving will fuse truck and driver into a team more than ever, and into a meaningful, effective and highly economical combination of man and machine,” the truck maker says.

The company says that drivers will remain “the boss in their vehicle” because the technology of the Freightliner Inspiration still requires the presence of a qualified truck driver with valid commercial driver’s license in the cab and on the gauges. Daimler is not the only company to challenge automation technology for heavy-duty trucks. Sweden’s Scania (a unit of Volkswagen) has been developing the so-called platooning on roads system that allows several trucks to move in tight convoy with a sole human driver in the lead vehicle. Apart from fuel savings, one of the major advantages of platooning is a reduction in traffic congestion, Scania says.