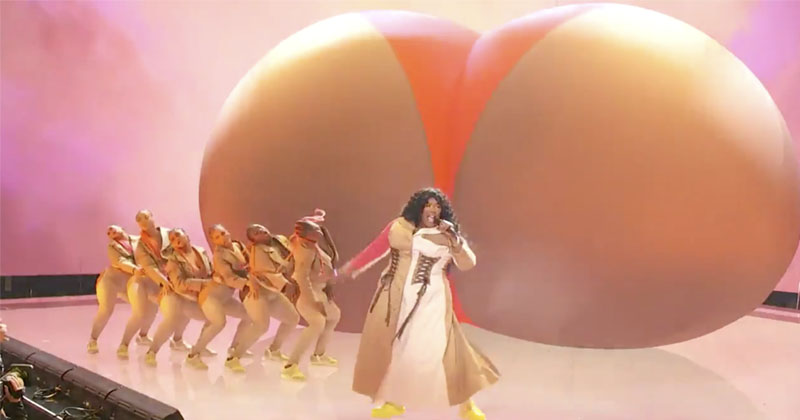 Colorful. Vibrant. Joyful. Unapologetic. Powerful. How could you not love @lizzo? pic.twitter.com/bPLZB3BZ1O

The video shows Lizzo dancing and twerking on stage with a massive inflatable prop in the likeness of a fat woman’s bottom in a bikini bobbing around behind her.

Many users on Twitter were quick to point out the awkwardness of a presidential candidate trying to appear trendy to woo young voters.

I like Kamala but these types of posts just… pic.twitter.com/S4Hj2nGcKB

We need leadership! We don’t need to hear about how down you are 🙄 pic.twitter.com/W2OJswur2d

Others questioned why a supposed role model was promoting such crude imagery and degenerate behavior.

Is she dancing in front of a giant jiggling ass pic.twitter.com/lYQwIYABDD

Yep let’s keep the masses hypnotized by a big ass and background dancers.

Joyful and powerful, with a gigantic ass on stage ?….ooookay,….

Nobody believes that you really think this is promotion Worthy. And if you do think it's worth promoting, I'm disenchanted immediately. And I can get down with just about anything. But not a giant twerking ass balloon. Of all the things you could promote, and this…?

Such a great role model

There is a girls BUTT in the background! How much lower class can you get? We need singers to deliver a classy message not classless. How can YOU like it? ( nice voice thats it)

“Unapologetic”.
That’s not a good quality.

No thanks. Not interested in "performers" dancing around with big a$$ in a thong props.

And…a giant balloon shaped like a butt behind her.

Harris’ approval ratings took a dive to 8%, or fourth place among the Democratic field, after Rep. Tulsi Gabbard of Hawaii scorched her during the second Democratic presidential debate last month.

As we reported, the establishment frequently uses major music, fashion, and entertainment institutions to erode America’s social fabric with twisted imagery and messaging.

Young people are being taught that this is normal & acceptable. pic.twitter.com/heTWNLss2R

The debauchery inherent in a godless ego-driven society like Hollywood and the degenerative culture pushed by popular media are purely responsible for the collapse of American culture.