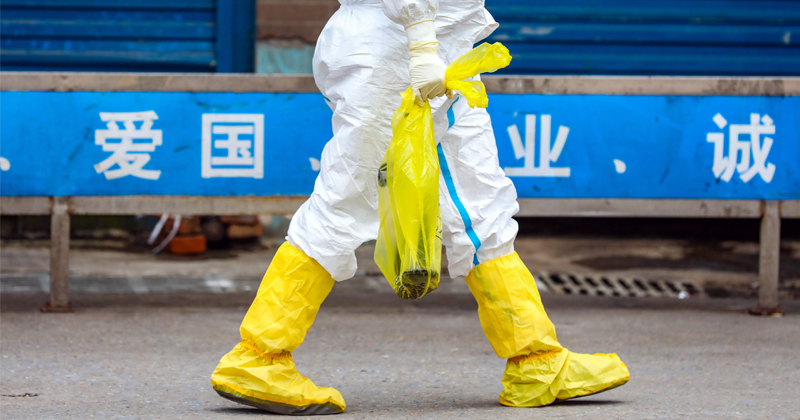 Nearly 44,000 people are already infected by the Wuhan coronavirus, warned academic researchers from the University of Hong Kong over the weekend.

The “official” number of infections claimed by the communist Chinese government is only 2900, revealing a desperate effort to cover up the true numbers and lie to the world about a dangerous, deadly pandemic.

“University of Hong Kong academics on Monday estimated that the number of patients in Wuhan had reached 43,590 by Saturday, including those in the incubation stage of the virus, which causes pneumonia,” reports the South China Morning Post.

“Lead researcher and dean of HKU’s faculty of medicine Gabriel Leung said his team estimated there were 25,630 patients showing symptoms in Wuhan and that the number would double in 6.2 days, according to mathematical modelling based on infection figures worldwide as of Saturday.”

Importantly, the Wuhan coronavirus is now known to be infectious during its incubation period, which means that people are spreading the pandemic even before they realize they’re sick themselves. According to a recent analysis published in The Lancet, family members of victims exposed to coronavirus showed no symptoms for 8 days before finally being diagnosed with full-blown symptoms. Additionally, about 2% of those infected show no signs of fever or respiratory distress, meaning they are able to pass right through airport security screening measures.

Here are the official Chinese government numbers, via SCMP:

Also from the SCMP: “Leung said his team’s research showed self-sustaining human-to-human transmission was already happening in all major mainland cities and warned that a pandemic might be close. ‘We have to be prepared, that this particular epidemic may be about to become a global epidemic,’ he said.”

According to the researchers’ model, the coronavirus pandemic will continue to spread rapidly across China’s major cities, peaking in “late April or early May” with “150,000 new cases” every day.

Lead researcher Gabriel Leung called for “draconian measures” across China to stop the spread of the pandemic.

Flights from China are still arriving each hour into U.S. airports such as Los Angeles and Seattle. Six coronavirus cases are now confirmed in the United States, with at least one of those confirmed in California. All the confirmed cases involved air travel passengers who had recently visited Wuhan province. It is almost certain that they exposed other travelers during their international flights. According to The Lancet, 83% of those who are exposed to coronavirus become infected with it. With an incubation time of 2 – 14 days, it’s still too early to know how many other people may be carrying this pandemic in the United States.

Several days ago, Natural News reported that at least 300,000 residents of Wuhan had fled the city before the quarantine went into effect. Now, Wuhan mayor Zhou Xianwang has confirmed that news, expanding it to five million residents who fled.

“About 5 million residents left Wuhan before the lockdown because of the deadly coronavirus epidemic and the Spring Festival holiday, mayor Zhou Xianwang revealed on Sunday, as health officials ­warned the virus’ ­ability to spread was ­getting ­stronger,” reports the SCMP.

According to official sources in China, confirmed cases of coronavirus are now cropping up in Beijing. It is not yet known exactly how many Chinese from Wuhan took international flights and may have carried the virus to other nations, but infection numbers continue to increase in the United States and Europe, although the number of officially confirmed cases still remains low.

Hong Kong University is calling on Chinese authorities to close all schools, workplaces and social gatherings in order to stop the pandemic from spreading.

The economic impacts of such decisions are barely being realized yet by journalists and investors. The U.S. stock market took a hit today as airline stocks plummeted, but the broader implications of China effectively cancelling all business operations for two weeks has not yet been factored into the markets. If this pandemic continues to spread, the economic impacts will take a devastating toll on a global scale.