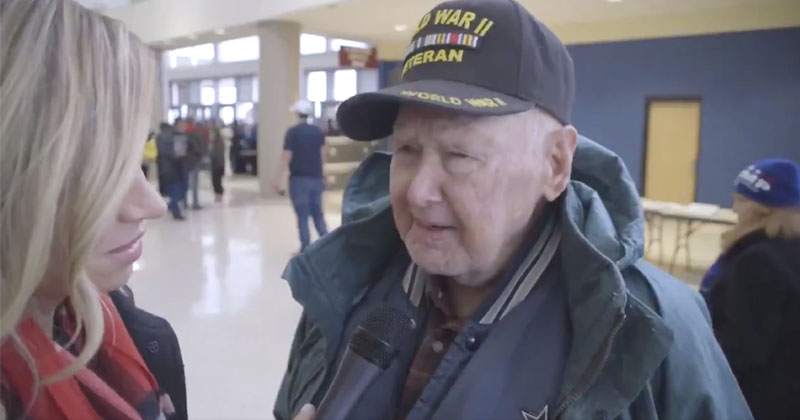 A World War II veteran lauded Donald Trump as the “first real president” of his lifetime during a Louisiana MAGA rally last week.

Former reconnaissance paratrooper known as “Red” told the Trump campaign’s National Press Secretary Kayleigh McEnany that President Trump has “got it all” as America’s Commander-in-Chief.

“I have to say this openly. He is the first real president that we’ve had in my 96 years,” Red told McEnany. “He’s got it all. Everything he’s done I’ve been asking for for all these years.”

I had the honor of speaking with Red, a 96-yr-old WW2 veteran at the Trump rally!

“@realDonaldTrump is the first real President in my 96 years… He’s got it all…. the guts, the structure, the stature, the knowledge,” he said.

“We have a man with the guts, the structure, the stature, the knowledge, and everything that goes with it.”

“Mainly, he’s doing the right thing,” Red added. “Every move he makes is right, the way I think.”

“To each veteran of the war, the glory of your deeds will only grow greater with time,” Trump said in his speech. “This city is graced with your presence. This nation is forever in your debt and we thank you all.”

Ryan Cary joins the war room to discuss the struggles veterans face after leaving military duty and how Ryan is using his platform, warriorbreedmcohio.com, to reach out and support vets in creative ways!