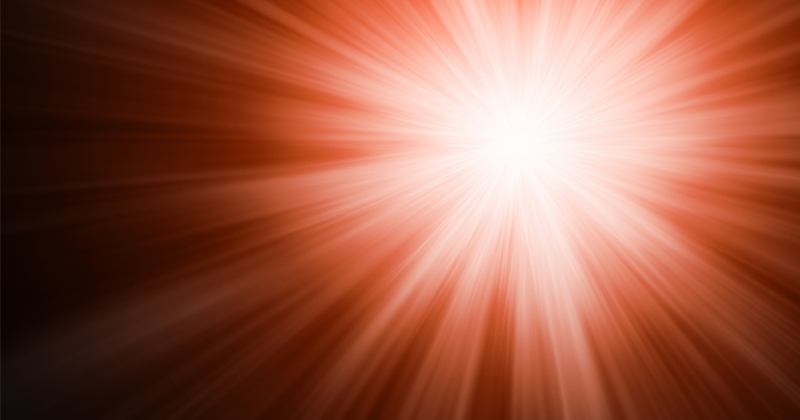 By detecting an X-ray flare from a very young star using NASA’s Chandra X-ray Observatory, researchers have reset the timeline for when stars like the sun start blasting high-energy radiation into space, as reported in our latest press release.

This is significant because it may help answer some questions about our sun’s earliest days as well as some about the solar system today.

This artist’s illustration depicts the object where astronomers discovered the X-ray flare. HOPS 383 is called a young “protostar” because it is in the earliest phase of stellar evolution that occurs right after a large cloud of gas and dust has started to collapse. Once it has matured HOPS 383, which is located about 1,400 light years from Earth, will have a mass about half that of the sun.

The illustration shows HOPS 383 surrounded by a donut-shaped cocoon of material (dark brown)—containing about half of the protostar’s mass—that is falling in towards the central star. Much of the light from the infant star in HOPS 383 is unable to pierce through this cocoon, but X-rays from the flare (blue) are powerful enough to do so. Infrared light emitted by HOPS 383 is scattered off the inside of the cocoon (white and yellow). A version of the illustration with a region of the cocoon cut out shows the bright X-ray flare from HOPS 383 and a disk of material falling towards the protostar.

Chandra observations in December 2017 revealed the X-ray flare, which lasted for about three hours and 20 minutes. The flare is shown as a continuous loop in the inset box of the illustration. The rapid increase and slow decrease in the amount of X-rays is similar to the behavior of X-ray flares from young stars more evolved than HOPS 383. No X-rays were detected from the protostar outside this flaring period, implying that during these times HOPS 383 was at least ten times fainter, on average, than the flare at its maximum. It is also 2,000 times more powerful than the brightest X-ray flare observed from the sun, a middle-aged star of relatively low mass.

As material from the cocoon falls inward toward the disk, there is also an exodus of gas and dust. This “outflow” removes angular momentum from the system, allowing material to fall from the disk onto the growing young protostar. Astronomers have seen such an outflow from HOPS 383 and think powerful X-ray flare like the one observed by Chandra could strip electrons from atoms at the base of it. This may be important for driving the outflow by magnetic forces.

Furthermore, when the star erupted in X-rays, it would have also likely driven energetic flows of particles that collided with dust grains located at the inner edge of the disk of material swirling around the protostar. Assuming something similar happened in our sun, the nuclear reactions caused by this collision could explain unusual abundances of elements in certain types of meteorites found on Earth.

No other flares from HOPS 383 were detected over the course of three Chandra observations with a total exposure of just under a day. Astronomers will need longer X-ray observations to determine how frequent such flares are during this very early phase of development for stars like our sun.