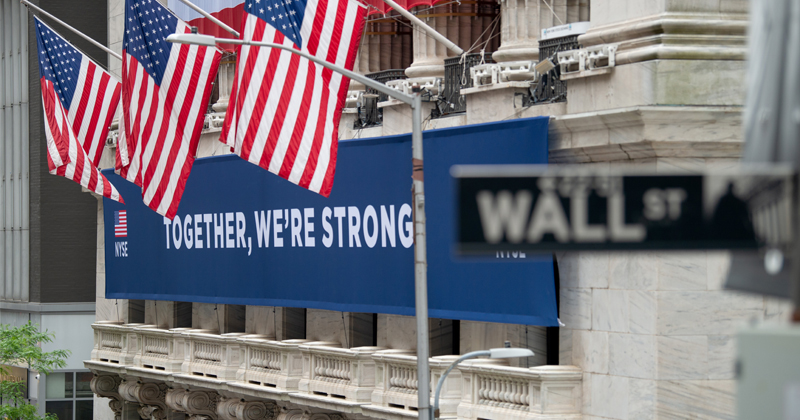 Peter Schiff has been warning that that real crash will be a dollar crash. Now, some people in the mainstream are starting to sound that alarm as well.

Even before the coronavirus pandemic, Peter was warning about the dollar’s demise. During an interview on RT last September, he warned that America’s “fiscal profligacy” was going to sink the dollar.

“What has enabled this over the years has been the world’s willingness to hold US dollars as the primary reserve currency and to continue to loan money to Americans and to the US government so we can continue to live beyond our means. We can have enormous government programs that we don’t pay for and we can consume all kinds of goods that we don’t manufacture, and we can live in an economy based on consumption and debt without having to save or produce. The world has done that for us. And I think this is what’s going to come to an end. I think we’re going to see a collapse in the value of the dollar, and when the dollar does collapse, America’s power is going to dissipate. And Americans are going to have to deal with the reality that we’ve hollowed out our infrastructure; we’ve been living beyond our means. And there’s going to be a day of reckoning for these years of excesses.”

The unprecedented Federal Reserve money printing and the massive borrowing and spending binge by the US government in response to COVID-19 have only accelerated the process. In March, Peter said during his podcast, “I think we’re very, very close to a major collapse of the dollar, a major breakout in the price of gold, to a breakdown in the bond market.”

Peter has generally been a voice calling out in the desert, but it appears some people in the mainstream are starting to see the problem. An article by Yale economist Stephen Roach published by Bloomberg this week echos Peter’s warning about the dollar’s demise.

Roach opens with an ominous warning.

“The era of the US dollar’s ‘exorbitant privilege’ as the world’s primary reserve currency is coming to an end.”

Roach asserts that “US living standards are about to be squeezed as never before,” and warns “a crash in the dollar could well be in the offing.”

Like Peter, Roach says the problem started long before the pandemic. He traces it back to a “profound shortfall in domestic US savings.” With no savings at home, the US has leaned on foreigners’ willingness to loan them money.

“Lacking in domestic saving, and wanting to invest and grow, the US has taken great advantage of the dollar’s role as the world’s primary reserve currency and drawn heavily on surplus savings from abroad to square the circle. But not without a price. In order to attract foreign capital, the US has run a deficit in its current account — which is the broadest measure of trade because it includes investment — every year since 1982.”

Roach argues that the rapidly expanding US government budget deficits in the wake of the pandemic are stretching things to the breaking point. Even with a higher level of fear-driven personal savings, it is being outstripped by federal spending. In April, the budget deficit was a full 50% larger than the level of personal savings. According to Roach, that’s bad news for the greenback.

“The coming collapse in saving points to a sharp widening of the current-account deficit, likely taking it well beyond the prior record of -6.3% of GDP that it reached in late 2005. Reserve currency or not, the dollar will not be spared under these circumstances. The key question is what will spark the decline?”

“As the economic crisis starts to stabilize, hopefully later this year or in early 2021, that realization should hit home just as domestic saving plunges. The dollar could easily test its July 2011 lows, weakening by as much as 35% in broad trade-weighted, inflation-adjusted terms.”

Roach says the decline of the dollar will have three major implications.

First, it will be inflationary. He even raises the specter of stagflation, saying the “tough combination of weak economic growth and rising inflation” could create havoc in the financial markets.

In a recent interview with Mark Dice, Peter was even more emphatic about this threat. “We’re going to have a lot of unemployed people who are going to be paying a lot more money for basic necessities. So, this is going to be stagflation, only the stagnation part is really depression and the inflation can even potentially be hyperinflation.”

And finally, Roach asks a key question: “In the face of Washington’s poorly timed wish for financial decoupling from China, who will fund the saving deficit of a nation that has finally lost its exorbitant privilege?”

“Like Covid-19 and racial turmoil, the fall of the almighty dollar will cast global economic leadership of a saving-short U.S. economy in a very harsh light. Exorbitant privilege needs to be earned, not taken for granted.”

As Peter said in a tweet, he’s not the only one who thinks the US dollar will crash.

“Get rid of yours while you still can. Buy #gold or invested to good value, dividend-paying foreign stocks before the bottom drops out of the dollar and you can no longer afford to.”