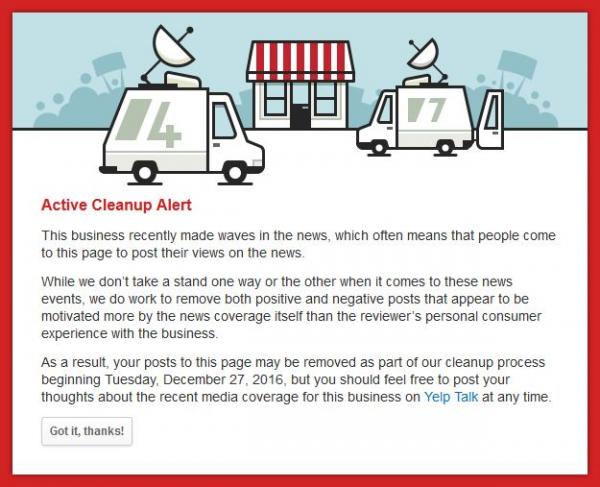 Yelp, which encourages people to review their local businesses, is purging negative reviews of a Hawaiian restaurant which called its pro-Trump customers “nazis.”

Honolulu’s Cafe 8 1/2 posted a sign outside its door stating “if you voted for Trump, you cannot eat here! No nazis.”

While it’s perfectly within the owner’s right to refuse service to anyone, Yelp is deleting reviews from irate customers who feel the practice is unprofessional and discriminatory.

On the diner’s review page, Yelp administrators posted an “active cleanup alert” stating they will “remove both positive and negative posts that appear to be motivated more by the news coverage itself than the reviewer’s personal consumer experience with the business.”

However, when a customer is banned from a restaurant due to discrimination, that is by definition a “personal consumer experience,” yet it appears Yelp is purging those reviews as well.

And it isn’t a stretch to suggest Yelp has an anti-Trump bias given that the company is based in the Bay Area, a hotbed of Trump hatred.

The restaurant owner, Robert Warner, is also from San Francisco; he was a former hair stylist for Vidal Sassoon in the Bay Area and also lived in Seattle.

“Robert just wants to express how much he doesn’t like Trump,” she said. “If people take it personally or it hurts them, we cannot help.”

“That’s why we say they have a choice if they want to come or not come. We don’t force them.”

But there are other ways for them to express their distaste for Trump without alienating many of their customers and risking the closure of their business.

For any business to survive, the welfare of its customers must be its top priority.

Honolulu’s Cafe 8 1/2 should focus more of whether customers are having a good dining experience, not who its customers voted for in a presidential election which right now has little effect on the company’s day-to-day operations.

And it’s doubtful the cafe’s customer base is large enough to swing a national election, so why would it even matter who patrons voted for?

The restaurant owners are an example of the entitlement mentality that plagues the anti-Trump left; to them, it appears customers should serve their needs rather than vice versa.

Ironically, however, that’s a key component of crony capitalism that many leftists claim to hate, but they don’t understand that because they often confuse free market capitalism with cronyism.