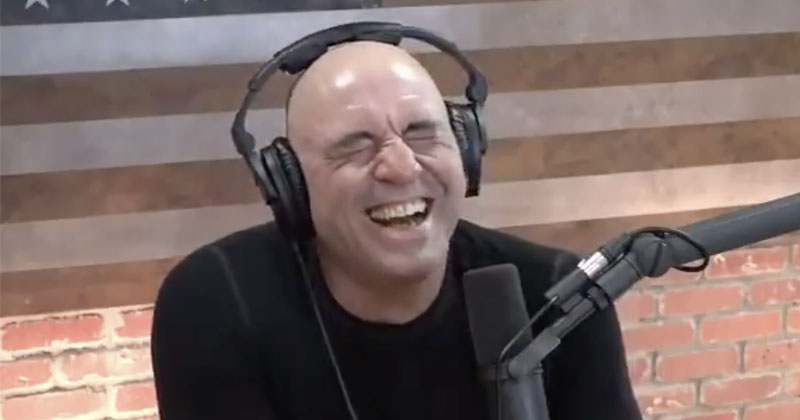 Rogan specifically cited a recent clip of Biden attempting to quote the Declaration of Independence during a rambling campaign speech earlier this week, referring to God as “the thing.”

“Stop. Pause. You can’t be President,” Rogan said. “Listen, we can’t play any games here, folks. This is a really old man who can’t talk…This should get you into a mental hospital.”

Here's @joerogan correctly pointing out that @JoeBiden can't be president in the state he's in. pic.twitter.com/ldBtRz9NUW

As Joe surged ahead of the Democrat field on what he called “Super Thursday,” so too did criticism by the far-left of his mental faculties and policy positions.

On Saturday, #HellNoJoe trended on Twitter, resulting in a deluge of embarrassing clips and compilations circulating social media showing Biden stuttering, slipping, gaffing, and appearing to demonstrate bouts of dementia.

#HellNoJoe
Stop sugar-coating it.
Joe Biden has Dementia.
He will lose to Trump. pic.twitter.com/Mfh5sWwhO2

Joe Biden's campaign will never survive the truth. Bernie and Trump need to run ads day and night about how Biden is not mentally fit to be President. #WhereIsJoe #HellNoJoe pic.twitter.com/Uya73iv8th

To beat Bernie, trump would have to lie and say “communist”

To beat Biden, Trump will just have to use Joe’s actual record and mental capacity. #HellNoJoe

👎Voted for NAFTA, destroying American manufacturing
👎Supported the TPP
👎Voted for the Iraq war
👎Can’t attack Trump for trying to cut social security and Medicare (because Joe tried to cut them too)
👎Has no grassroots support#HellNoJoe

Additionally, #WhereIsJoe also trended after Biden spoke for only seven minutes during a rally in Missouri on Saturday, where he still managed to fumble words and accidentally let slip a possible endorsement by failed 2020 Democrat candidate Kamala Harris.

In probably his first appearance since Super Tuesday, Biden accidentally leaks the Kamala Harris will endorse him #WhereIsJoe #HellNoJoe pic.twitter.com/oBBChut690

The Michigan primary will take place on Tuesday, where Biden is polling at 29%, with socialist rival Bernie Sanders trailing at 23%.