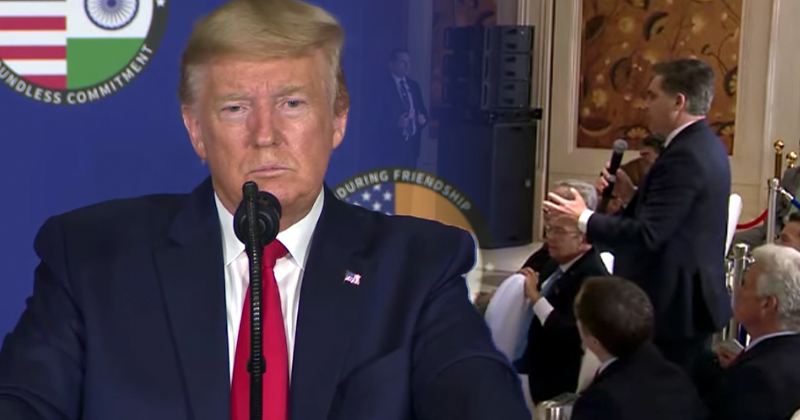 Acosta’s question surrounded recent reports claiming Russia was already meddling in the 2020 election to the benefit of Trump, which the president brushed off as more disinformation from the media and the Democrat party.

Watch: CNN’s Jim @Acosta and President @realDonaldTrump just had quite a clash over Russia pic.twitter.com/eNyzavWuzi

Can you “pledge to the American people that you will not accept any foreign assistance in the upcoming election?” Acosta asked the president.

“First of all,” Trump began, “I want no help from any country… And I haven’t been given help from any country and if you see what CNN, your wonderful network, said, I guess they apologized in a way for — didn’t they apologize for the fact that they said certain things that weren’t true? Tell me, what was their apology yesterday? What did they say?”

Acosta shot back, “Mr. President, I think our record on delivering the truth is a lot better than yours sometimes if you don’t mind me saying.”

“Let me tell you about your record,” the president responded. “Your record is so bad you ought to be ashamed of yourself… You probably have the worst record in the history of broadcasting.”

“I’m not ashamed of anything and our organization is not ashamed,” Acosta asserted.

The president continued by answering Acosta’s second question concerning his replacement of former Acting Director of National Intelligence Joe Maguire with Richard Grenell, whom Acosta claimed had “no intelligence experience.”

“On March 11 his time ended anyway, so his time came up,” Trump said. “So we would have had to, by statute, changed him anyway.”

At the press conference, the president also responded to bias in the Supreme Court exemplified by Justice Sonia Sotomayor, who recently “accused GOP appointed Justices of being biased in favor of Trump,” according to Fox News.

President Trump on Supreme Court Justices Sotomayor and Ginsburg: "I just don't know how they cannot recuse themselves for anything having to do with Trump or Trump related." #SCOTUS

“I just don’t know how they can not recuse themselves from anything having to do with Trump or Trump-related,” Trump told reporters. “The right thing to do is that.”

“What Justice Sotomayor said yesterday was really highly inappropriate and everybody agrees to that. Virtually everybody. I’ve seen papers on it, people cannot believe that she said it.”

Trump also commented on Monday’s verdict in the Harvey Weinstein rape trial and remarked on his ties to prominent Democrat allies.

The question was "do you think justice was served in the Harvey Weinstein case?" This was Trump's full answer. pic.twitter.com/vyF3f1a5Lw

The news conference followed a massive rally Monday in Ahmedabad at the Motera cricket stadium attended by over 110,000 people, where the US president and Indian Prime Minister Narendra Modi celebrated ties between the two nations.

Christian persecution has exploded under India’s Hindu nationalist government. Here’s what it looks like when “democracy” doesn’t like you and there’s no First Amendment.