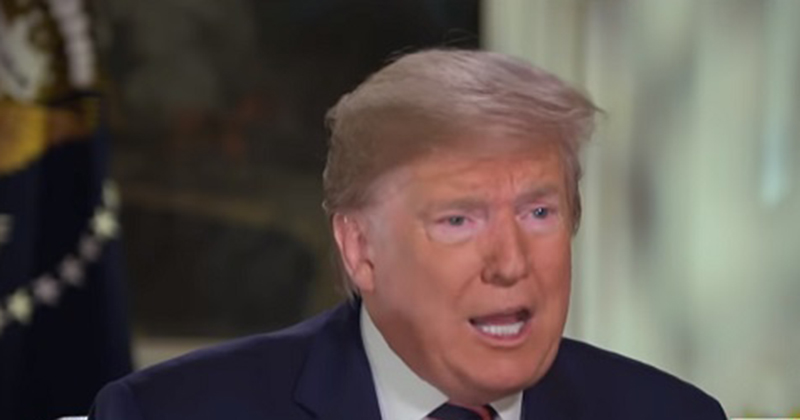 INGRAHAM: Mr. President when you look at the trajectory of your administration, huge progress on trade, incredible progress on dealing with our political foes, ISIS, incredible deregulation, judges, you’ve done a lot. On the economy today, we found out that still added 146,000 jobs, unemployment historically low at 3.5 percent. But we do have a little bit of a stall out on wage growth, which you ran on, and we’ve seen some, 2.9 percent last year, 0.1 percent over the last month.

INGRAHAM: But we don’t have a tight labor market. If we had a tight labor market, we’d be seeing real increases in wages. I hear that your team is planning on advocating more foreign workers coming in for some of these high-tech companies. I’m very concerned about that, as are a lot of your supporters.

TRUMP: And so is Mark Levin a little bit.

INGRAHAM: Yes, we are concerned, because Americans —

TRUMP: So is the great Lou Dobbs. Lou Dobbs is concerned, too. But I’ll say, Lou, here is the problem. I am demanding that Japan and all these countries that have these massive, we have trade deficits like nobody has ever seen before. I said you have to open up. I call Prime Minister Abe, he’s a friend of mine. I say Shinzo, you have got to open up more plants in the United States. And they tell me, we want to do it, we want to do it. They start opening. They can’t get labor. We need help. Otherwise, we could just say don’t open up —

INGRAHAM: If they couldn’t get labor, wages would be going up. But wages aren’t going up.

TRUMP: Wage are going up.

INGRAHAM: Not in the high-tech industry. We are seeing a plateauing of wages.

TRUMP: It went up three percent and it went up 2.9 percent. In the last two year, wages have gone up more than they have 25 years.

INGRAHAM: But for Google, why reward Google? Google is working against you in the campaign.

TRUMP: I’m not a fan of Google. I’m a fan of great companies, OK.

INGRAHAM: You did not run on bringing more foreign workers into the United States.

TRUMP: It’s not foreign workers. We have to allow smart people to stay in our country. Your graduate number one in your class at Harvard. You graduate from the Wharton Schools of —

INGRAHAM: That’s a small percentage of what they want.

INGRAHAM: But you ran on people training their foreign replacements — you ran against that. The Americans, it’s humiliating for an American worked for a company for 30 years, now is told you have to train your foreign replacement, he’s going to live in Korea, and you’re going to pay him 20 percent.

TRUMP: No, no, that’s different. I would never do that. But we do need workers in our country. And I do want immigration policy. Nobody’s been better on immigration then me. By the way we won the funding for the wall, and the wall has been built anyway because I was taking it out of the military and everything else. And now it’s easier. We need people come. I got Foxconn to go into Wisconsin. They have to get people. They spent a fortune, they built the most incredible plant I’ve ever seen in Wisconsin, Foxconn —

INGRAHAM: They why should we have American graduates of colleges and universities taking those jobs?

INGRAHAM: They want to hear people they can hire for the cheapest amount because that’s what they want.

TRUMP: I’m not talking about cheap. I’m talking about brainpower. They want to hire smart people. And those people are thrown out of the country. We can’t do that.

INGRAHAM: You ran on America first.

TRUMP: No, this is America first.

TRUMP: Excuse, I just have to finish this. If we tell smart people to get the hell out —

INGRAHAM: That’s not what we are saying.

INGRAHAM: There is a never-ending appetite on the part of corporate America to bring in as much cheap labor as possible to drive down wages. That’s going to happen.

As Progressives for Immigration Reform revealed last week, Donald Trump Jr echoed Trump’s push to import foreign labor in his book “Triggered” by bashing American college students and singing the praises of H-1Bs as the world’s “best and brightest.”.

In his new book “Triggered”, @DonaldJTrumpJr pushes the trope that American kids are all dumb & in debt because they got a Phd. in “basket weaving” while maintaining that H-1B visa workers all high-skilled “best & brightest”, & wants MORE to come. pic.twitter.com/zrr1JrjkDW

Ivanka has also been out shilling for the mass importation of cheap foreign labor.

And at CES today, @IvankaTrump also pushing the same tropes & thinks all international students that study in the United States should be given green cards because they are all high-skilled & “start companies”. Indian media is rejoicing: https://t.co/ef9Za8aSEd

H1-B holders in the United States can rest assured that changes are soon coming which will bring both simplicity and certainty to your stay, including a potential path to citizenship. We want to encourage talented and highly skilled people to pursue career options in the U.S.

H1-B holders in the United States can rest assured that changes are soon coming which will bring both simplicity and certainty to your stay, including a potential path to citizenship. We want to encourage talented and highly skilled people to pursue career options in the U.S.

"The admin’s immigration plan, overseen by Jared Kushner & expected to be released early in the new year, will reportedly set in stone the legal immigration level of 1 million-plus each year, & thus continue the shift of political power toward blue states" https://t.co/a5YfLf5oAo