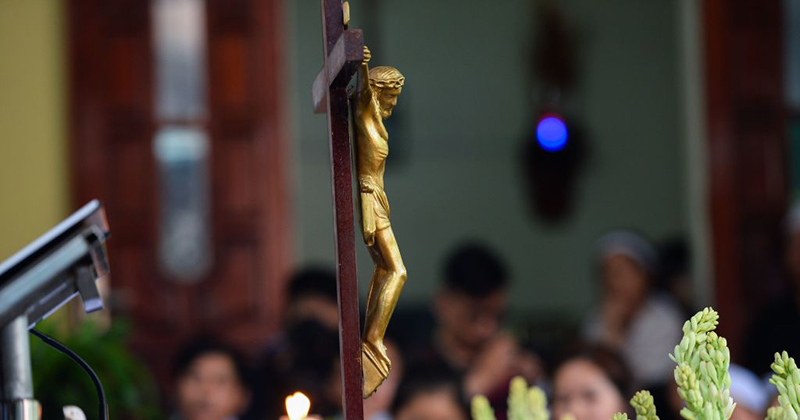 A group of young French-Canadian Catholic men penned an open letter to their bishops begging them to teach their traditional Catholic faith rather than the doctrine of prog-globalism.

From LifeSite, “Catholic young men ask bishops to teach traditional faith and save them from nihilism, despair”:

A group of young French-Canadian Catholic men are asking their bishops to teach the traditional faith and give the spiritual leadership they say is essential to combat the nihilistic culture that tempts many to despair.

That includes allowing access to the traditional Latin Mass.

Twenty-nine men between the ages of 18 to 44, including university students, a doctor and two lawyers, signed an open letter titled “We Ask for Faith: Open Letter to the Bishops of the Catholic Church in French Canada” (read full letter below in English).

A lay initiative, the letter was sent to 23 bishops of French-speaking dioceses across Canada, as well as the Assemblée des évêques du Québec, or Quebec bishops’ conference, in early November, says George Buscemi, president of Campagne Québec-Vie, the province’s largest pro-life group.

Alex Jones breaks down deep research and critical information that’s absolutely vital to get out to the world! The impeachment proceedings are a sham designed to protect the deep corruption within Washington, DC.
By the way, save money while improving your daily life by ordering the Change Your Life Trifecta Pack during our Cyber Week sales!

Here’s the full letter as shared by LifeSite:

We Ask for Faith: Open Letter to the Bishops of the Catholic Church in French Canada

(The signatories of this wonderful open letter are university students, a doctor and two lawyers. Twenty-nine men in all from 18 to 44 years old. They have decided for the moment to remain anonymous, as some are aware of the consequences that such a letter could have on their jobs, or their studies.)

We send you this letter for three reasons: first, to tell you about the many evils suffered by French-Canadian men, then, to testify to the innumerable graces we receive through the Catholic Faith in its traditional form and finally, to beg you to make available to the greatest number this treasure that nourishes our souls and raises us to God.

A life of suffering

Every day, we are witnessing the devastating effects, on our compatriots, of a society turned towards man rather than to God. From his conception to his death, the French Canadian is measured on the scale of his utility for the consumer society, rather than that of the ardent love of his divine Creator. Our people live daily in a culture of death that robs them of the desire to live and the desire to transmit life. Our brothers and our friends are born into families broken by divorce. They grow up without male models.

They are given drugs because they are too boisterous at school. Dangerous ideologists wash their brains from an early age with perverse and abject doctrines, which deny the natural law created by God and thus sow doubt in many gullible minds. From adolescence, they are confronted with a premature and unhealthy sexuality influenced by pornography. Then come the alcohol, the drugs, the debilitating clothing styles and musical fashions, the intimidation and the suicide of some friends. At Cégep, our young French Canadians are taught by their Marxist teachers hatred of themselves, their culture and their ancestors; they are encouraged to worship the “Other”.

Having become adults, they find themselves a companion, but perpetuate by their actions the cultural scheme that is proposed to them, that according to which the human person is a consumer good like any other and that it is possible to simply throw away once obsolete. Every day, the infernal materialistic cycle of “metro-work-sleep” is repeated, to allow French Canadians to consume the last useless product that will serve to temporarily fill the abyssal void that inhabits them. Once this product is consumed and the attraction of the novelty having disappeared, the chasm dug by nihilism reappears and they go in search of a new product, a new holiday destination, or a new woman to seduce.

In turn, they divorce, lose their jobs, fall into depression; some do not see their children anymore. The media then tell us yet another case of “family drama” and the man is still portrayed as a wretch. For those who arrive at a later age, some grow old in loneliness, abandoned by their families.

Others are found dead in their homes, several days after their deaths. For those who have not had the chance to go out naturally, there is still euthanasia. Obviously, and fortunately, we do not all experience all this suffering, but we are daily witnesses of a people committing suicide.

The call of God

In the midst of our meaningless lives, living from day to day waiting for death, we have heard the call of God. In a singular way for each of us, the Good God made us discover or rediscover the Faith of our ancestors. For some it was a true love at first sight to Our Lord Jesus Christ and others, it was by a Love that grew slowly, but became just as strong. We tamed the inner life, discovered prayer, silence. We learned that we were not alone. God had desired and loved us at the very moment of our conception and He was always there with us and for us. We learned the Evil that we were doing to Him and that we still did Him through our sins, but also that despite our ingratitude He agreed to give His life for us so that we have eternal life.

An inheritance not transmitted

In the face of the Treasure of Faith that we had just discovered, we felt a certain bitterness towards our parents and those who preceded us. So we looked for anything else that they thought was appropriate not to transmit to us. The answer is in the question; we discovered that we were not beings without roots, without history, without culture and without faith who lived only to oppress women, homosexuals, ethnic minorities, in short, everyone who was not “us”. So we do not have to repent indefinitely of imaginary mistakes.

We are French Canadians, our roots penetrate deeply in the New World, but also in Europe, even in the soil of France, the eldest daughter of the Church. We knew Clovis, Charlemagne, the Crusades, St. Louis, St. Joan of Arc, then our ancestors crossed the ocean and conquered a land of forests and ice that they cleared and fertilized with their sweat and blood, in order to found a new province of the Kingdom of France. Admittedly, we subsequently suffered heavy defeats. Statesmen abandoned us for strategic reasons, but Our Blessed Mother the Church continued to watch over us. Under her protective cloak, while we were threatened with extinction by our small numbers, we became millions despite the oppression of a colonizer who wanted us to disappear. Our culture is rich, contrary to what we have been taught. It does not boil down to a professional hockey franchise, the sugar shack or poutine.

We are the heirs of ancient Greece and classical Rome. Our language was not born in a Michel Tremblay play, but rather in the France of Rabelais, Racine, Corneille, Molière, La Fontaine and Bossuet.

It is to its fruits that we recognize the tree

In this era of euphoric delirium and destructive madness that was the 60s, those who preceded us gave way to a wave of inspirations from the depths of Hell. According to the words of the International, the past was wiped out in all areas, including within Our Blessed Mother the Church, which made Pope Paul VI himself say that the smoke of Satan was given entrance by some crack in the temple of God. Not a single sphere of Western life was spared by this madness. The states changed laws that were previously based on Catholic dogmas and morals. Divorces appeared, as well as condoms, anovulants and “emancipation” of women. This led to the break-up of families and society and the greatest genocide in the history of humanity, abortion.

It is in this society that we were born. An exploded, materialistic and nihilistic society that lives only in expectation of the next ephemeral pleasure. A society that has swapped the worship of God for the worship of man and teaches us to despise the Church, this institution in the depths of the Great Darkness which was full of hateful pedophiles and which we were saved by the Enlightenment of the Quiet Revolution.

Like our patron Saint John the Baptist, we are the voice that screams amidst concrete ruins and potholes. It is our duty to scream in the name of our brethren who commit suicide and our dying people.

Eminence, Excellencies, we repeat to you the answer that our godparents gave you on the day of our baptism when you asked them the question: “What do you ask of the Church of God? And they said, “Faith! We ask you the Catholic Faith in its entirety, without sweetener. We ask that our people have access to the Holy Sacrifice of the Mass in a dignified form that gives glory to God. Our Lord Jesus Christ answered Satan, who tempted him in the wilderness, that man shall not live by bread alone, but by every word that comes out of the mouth of God. We do not need a clergy who behave like social workers and bureaucrats.

Eminence, Excellencies, it is our souls who are hungry and thirsty for God. Dare to go against the grain and teach the gospel of Our Lord Jesus Christ, guide us to the good God and put on your cassocks so that we recognize you in the street and confess to you. Our ancestors lacked everything, they were hungry and cold, lost their grandchildren because of childhood diseases, worked like slaves to clear the land, but their souls were richly nourished by the good God.

Unlike them, our bellies are full and we have a roof over our heads, but our souls are empty. Only you can help us, so we implore your paternal benevolence.

Eminence, Excellencies, we hope you will not be deaf to our call. We assure you of our filial piety and respectful obedience.

The disinherited of French Canada