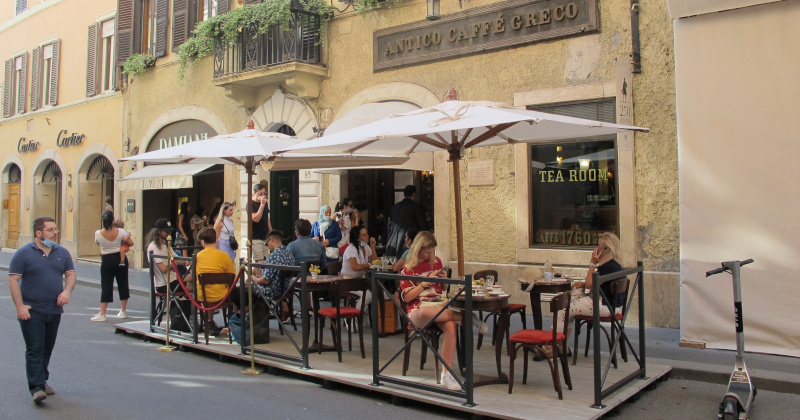 The 20-something Italian is having none of it. For the woman and her friends relishing the relief of a cool August breeze at a bar in a medieval piazza, the coronavirus pandemic is much ado about nothing.

A means solely to control them and empower bureaucrats. While the stones beneath her feet cooled in the evening air, the young woman became angry as she declaimed against the coronavirus restrictions.

“It is all about politics,” she said emphatically when I asked why she and her friends were congregating in such large numbers, embracing and canoodling in defiance of social distancing advice.

“It is just politics,” she repeated.

Crises often expose longstanding divisions. One of the sharpest in Italian society in recent years has been between the old and the young, and the pandemic appears to be widening the split.

Young Italians have long chafed at what they see as the hold that older generations have on the country. A rigid labor market that favors those already employed has led over the past decade to a persistent lack of job prospects for younger people.

Nearly 30% of Italians under the age of 25 are unemployed, according to Eurostat, the European Statistical Office. And many of those in work face a future of short-term contracts with no job security and few, if any benefits or opportunities for promotion.

One in three Italians under the age of 34 is not working, in training or in full-time education. They are doing nothing in a country that isn’t encouraging them to do anything — hence the large numbers of young Italians, generally the better educated and most resourceful, who decide to emigrate.

As many young Italians see it, the old selfishly guard their share of a shrinking economic pie, allowing them mere crumbs that can’t feed a future.

For those in work, Italians pay nearly 50% more taxes than previous generations, and the state pensions they will eventually get will be only about half of what their parents and grandparents now receive.

For the self-employed and those trying to run small businesses, a frequent complaint is that they can’t secure lucrative public commissions because those are awarded to people with connections, a system of patronage favoring the older and more established.

When the pandemic first struck, turning Italy into the coronavirus canary of Europe, the young were as mindful as the old, reveling in a sense of national solidarity and pride that many skeptics thought modern-day Italy was no longer capable of summoning. Unrest built up over time, but the lockdowns and restrictions were more carefully observed in Italy — to my eye anyway — than what I found subsequently in Britain.

A northern Italian friend now living in Rome admitted to me her surprise at the discipline Italians demonstrated. Carmen had predicted it would all fall apart “unfortunately, as the Italians are very ill-disciplined and indifferent.”

But the frustration of young Italians is clearly manifest now. The beach, lakes and parties beckon.

Drive through the Lazio villages and towns ringing the Italian capital Rome, and Italy seems a country for the young, in contradiction of its graying demographic. Older people are more cautious and tend to shield as much as they can at home, most venturing outside only to shop.

The traditional piazza gatherings in the summer evenings for an aperitivo are populated more by the young than the old, who favor taking their traditional passeggiata (an evening walk) away from other people.

“The clock stopped for us for months,” said Paolo, a 25-year-old out-of-work graduate. “No longer,” he added as he downed a beer in a village square in the town of Sutri, half an hour’s drive from Rome.

How youthful frustrations will play out politically is a question many politicians and political strategists are scrambling to plot.

In the country’s March 2018 elections, young people voted in droves for two parties — the maverick, anti-establishment MoVimento 5 Stelle, or MS5, the brainchild of shaggy-bearded stand-up comic Beppe Grillo, and the Lega, the populist anti-migrant right-wing party of the firebrand Matteo Salvini.

Another election isn’t due until 2023. If the clock has not been reset to favor Italy’s young, another momentous electoral upset could be in the making, one that some political analysts argue can only rebound to Salvini’s advantage, especially if the country remains mired in an economic crisis while richer north European countries like Germany rebound more successfully from the pandemic.

The clock seems to have stopped in other ways in Italy, too — and not just for the young.

Even in the immediate wake of the crippling 2008 financial crash, piazzas and coastlines, lakeshores and monuments were crowded with foreign tourists. Admittedly the numbers were way down in previous years, but the visitors came.

Now Italy is without its normal nearly 6 million American tourists, who tend to be the bigger spenders, and without nearly 4 million Chinese tourists as well as Russians. Italy’s strict ban on “non-essential” travel from the United States and Russia remains in place, and Venice, the Amalfi coast and Tuscany are suffering from their absence.

Quaint villages in Lazio and Umbria had experienced a renaissance in recent years due to an influx of Chinese tourists. Now those areas are pondering how they will weather the coronavirus storm and whether the unexpected boom of the last half decade will be revived again.

There are no restrictions on travelers from most other European Union countries, and the English, Germans, Dutch and others are coming, but not like the usual numbers.

A recent poll for broadcaster Euronews found most Europeans are reluctant to vacation away from their home countries due to the pandemic. The majority of German, French, Spanish and Italian respondents said they do not intend to travel for a summer holiday.

Many Italians are instead enjoying a “staycation,” which is helping to make up a little for the absence of foreign tourists. It is also giving a feel to Italy reminiscent of the 1970s and 1980s when — aside from Rome, Venice and Florence — the beaches, lakes and smaller tourist spots were crowded with Italians rather than foreigners.

For some Italians, staycations have allowed them to reacquaint themselves with their country and enjoy the kind of vacations they had with their parents when they were young.

It has become quieter and more tranquil in some ways, a Milanese businessman told me as I dined nearby while suitably distanced.

“We always vacation abroad,” he told me. He mentioned New York, London, Florida and Paris. “But sitting here with my kids takes me back to my trips when I was young. There is a nostalgia to it that has been one of the best things this year.”