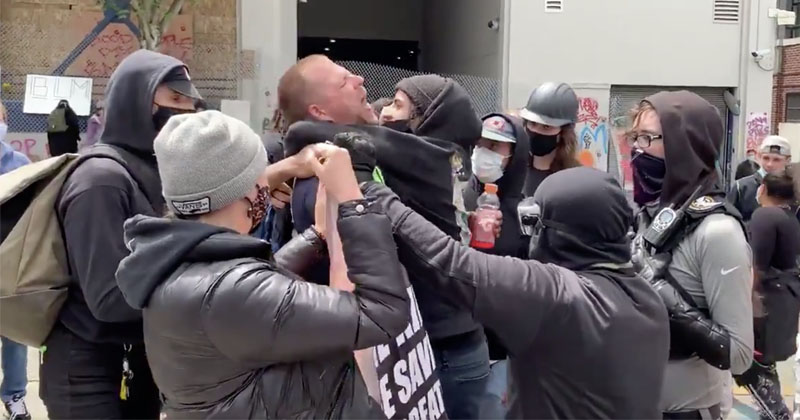 Video out of the so-called Chapel Hill Autonomous Zone (CHAZ) in Seattle shows a group of Antifa terrorists choking, tackling, and eventually evicting a Christian street preacher from their utopian society.

The incident apparently started when Antifa began harassing and threatening the preacher within the zone.

Separate video then shows Antifa surrounding the preacher, with several thugs “bear-hugging” and sexually assaulting him.

“What does it feel like to be hugged by a homosexual?” one of the Antifa asks before forcing kisses upon him.

In #CHAZ a street preacher is surrounded by ANTIFA

A professing homosexual man holds onto him,

they eventually released him

There are no cops,

but there are definitely rules in the Automomous Zone pic.twitter.com/2b1NTLjSk8

“Glory to the king!” the man cries as he resists.

Soon after he breaks free, another video captures Antifa tackling the preacher and putting him in a headlock as he screams, “You’re choking me!”

Once the occupiers realized they (a group of men)

were choking a man facedown on the street

Definitely unhinged but this is what community policing looks like

The young man in the dreadlocks was actually helping deescalate situation pic.twitter.com/vknjjvmteC

Another video ironically shows Antifa explaining to the preacher that they have the right to deport him from their new nation.

“the autonomous zone has the right to reject you”

As he screams “I am free citizen!”

While they pry his speaker from his hands

And chokehold him at one point face down like George Floyd (video below) pic.twitter.com/a1pry438jA

The preacher is then seen getting dragged out of the zone by Antifa.

The video of the preacher getting choked out had gotten over 150,000 views by the time President Trump retweeted it on Saturday.

Notably, the media and Democrats like Seattle Mayor Jenny Durkan are gaslighting the American people over Antifa’s armed occupation of downtown Seattle, characterizing CHAZ as a “peaceful protest” and a “summer of love” type festival with a “block party atmosphere” now that it’s police-free.

Lawfully gathering and expressing first amendment rights, demanding we do better as a society and provide true equity for communities of color is not terrorism – it is patriotism.

Antifa created their own country in downtown Seattle, and things aren’t going so well.