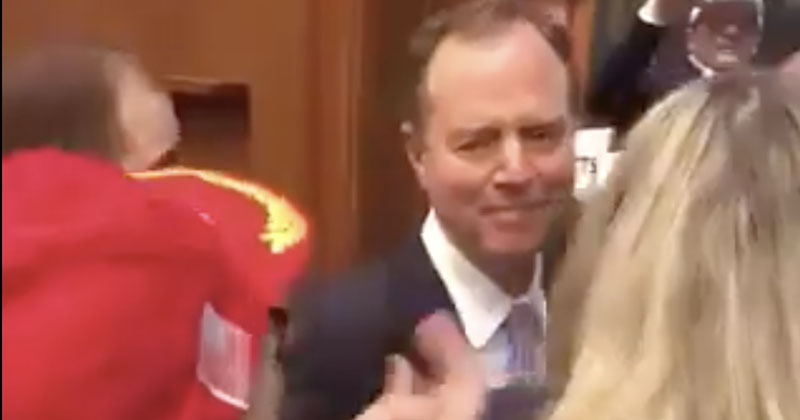 Several videos have emerged of California voters angrily confronting House Intelligence Committee Chairman Adam Schiff during a town hall meeting over the weekend over his impeachment coup against President Trump.

One clip shows an irate crowd shouting at wide-eyed Schiff as he stood at his podium, calling him a “liar” and asserting he should be jailed for subverting the will of the American people by attempting to remove Trump.

“You should go to fucking jail!” one voter yelled. “You should be in jail! You are a disgrace to the House of Representatives! You will be going to jail for treason!”

This man is 💯 correct @RepAdamSchiff. You should be in Jail for lots of reasons. You are a Disgrace. pic.twitter.com/Y3JZtQ2N6G

This is similar to a clip from 2018 showing voters confronting Schiff, saying he was lying and that he should move to the socialist Venezuela.

Adam Schiff confronted by Trump fans and told to move to Venezuela! 🤣🤣 pic.twitter.com/w40CHdoZ2Q

Schiff was also booed off the stage in December by Republican voters incensed over the Democrat coup to remove Trump.

The most recent confrontations come after Democrat impeachment managers led by Schiff failed to convince the American people last week after nearly 24 hours of opening remarks that Trump committed a crime.

Their argument was thoroughly destroyed in just two hours by Trump’s legal team over the weekend in a stunning cross-examination of the facts.