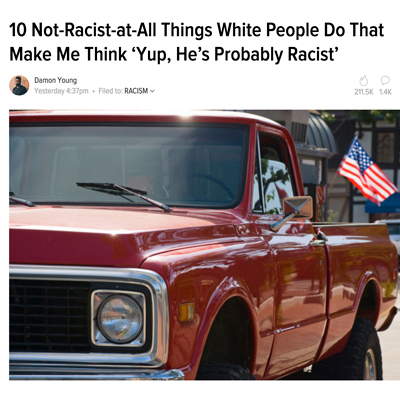 You’re likely racist if you’re a dog lover or if you’re patriotic, according to a leftist journalist.

Also, you’re probably a racist if you drive a pick-up truck and have a “strong regional accent” – even if you’re from Boston – according to frequent GQ contributor Damon Young.

“Look, I know dog lovers are generally good people, and usually better people than cat people, but if I check your Facebook or Twitter profile and your avatar is a dog, I’m, like, 60 percent certain you’ve trained that dog to bite darkies,” he wrote.

And pride in the USA is also apparently “racist.”

“We discussed this already last month, but the number of American flags within a white person’s vicinity has a direct correlation to the number of times they’ve referred to Hardee’s as ’n*gger Burger King.’”

Generally we don’t pay attention to an obscure writer who makes shocking statements to bring attention to himself, but this article was published in the backdrop of artificially-fueled racial division.

And you know it’s artificial when the “you might be a racist” proclamations are getting more and more absurd.

At least 1 in 5 African-American households in the US owns a dog, while 1 in 4 Hispanic households own one. Are these households racist against themselves?

And it’s worth mentioning that “microbreed,” non-aggressive dogs that weigh under 20 pounds are exploding in popularity as more Americans move into Agenda 21 coffin apartments.

But none of that is even the point.

What you’re seeing now is that basic, normal behavior, such as owning a Catahoula or standing up for the national anthem, is being demonized as “racist” because it’s easier for the elites to use “divide and conquer” techniques to fuel racial divisions to ultimately control the population.