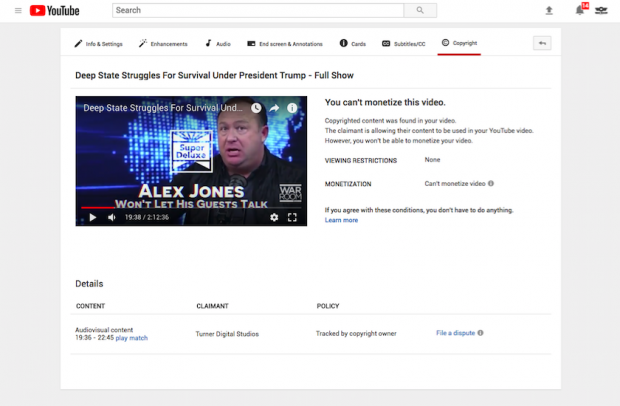 An Infowars video was demonetized by YouTube for featuring alleged copyrighted content of none other than… Alex Jones.

The content in question, discussed by Owen Shroyer on the Tuesday broadcast of the War Room show, was none other than a video compilation of Alex Jones compiled by comedy channel “Super Deluxe.”

After the War Room broadcast made its way online, YouTube removed monetization for the more than 2-hour long video due to the less than 4 minute clip featuring Jones.

The copyright claim, made by Turner Digital Studios, is yet another example of Infowars being targeted for censorship over frivolous claims.

YouTube owner Google recently announced it plans to hire over 10,000 workers to target “inappropriate content” on the platform – a sure sign that more undue censorship is yet to come.

The video hosting juggernaut has already been found to be giving warnings when users click links to Infowars that the site “may be harmful.”

“Users have to be signed in to watch the video, while comments, likes, and views have all been removed,” Watson wrote this month. This is a form of ‘limited state’ soft censorship that prevents a video from being shared or going viral.”

The company has come under fire as of late after it was learned that their site had failed to stop pedophiles abusing the platform to prey on children.