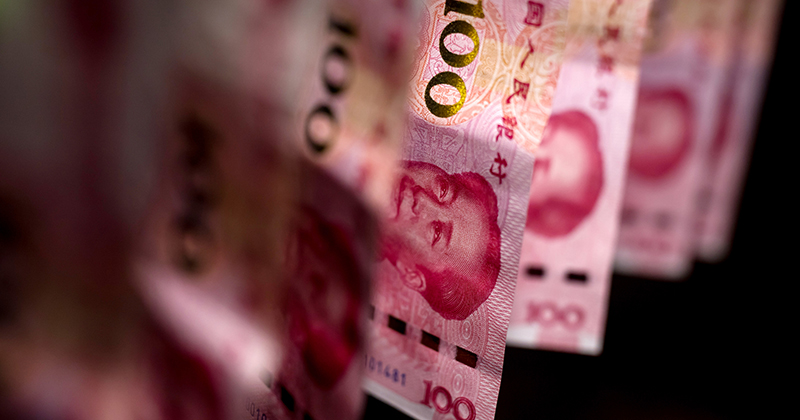 The Chinese yuan legged dramatically lower in this evening’s illiquid session which sees most of Asia closed for May Day.

This after Bloomberg reports that Trump is exploring blocking a government retirement fund from investing in Chinese equities considered a national security risk.

Trump made his initial threats from the Rose Garden at the White House Monday after he was pressed by a reporter over a German newspaper report suggesting that China should be issued a $160 billion invoice for the impact on Europe’s economy.

The president responded he had a “much easier” idea:

“We haven’t determined the final amount yet. It’s very substantial,” Trump added, suggesting it would be significantly more than the $160 billion floated in German media.

George Gammon on how to avoid the digital matrix

Asked whether he was considering the use of tariffs or even a debt write-offs for China (something which Larry Kudlow vehemently rejected earlier on Thursday), Trump would not offer specifics.

“There are many things I can do,” he said. “We’re looking for what happened.”

Since then various plans have been proposed, but Trump escalated the war of words further, during an Oval Office interview with Reuters  published Wednesday night,  saying that he thinks that China is determined to see him lose the November election based on Beijing’s response to the coronavirus, and that he is considering various ways to punish the Chinese government which he he again blamed for allowing the virus to spread across the world.

“China will do anything they can to have me lose this race,” Trump said in the interview and said he was looking at different options in terms of consequences for Beijing over the virus. “I can do a lot,” he said.

Which was quickly followed by denials from Chinese Foreign Ministry spokesman Geng Shuang, saying that China has no interest in interfering in internal U.S. affairs (unless of course that ‘affair’ involves investigating the origin of COVID-19). China hopes some people in U.S. won’t drag country into its internal processes, Geng said.

And tonight, Bloomberg reports that, after months of pressure from concerned lawmakers, according to a person familiar with the internal deliberations, the Trump admin is planning an executive order to block a 2017 decision that The Thrift Savings Plan, the federal government’s retirement savings fund, would transfer a massive $50 billion to an international fund which would mirror the MSCI All-Country World Index.

The issue being China’s addition to the index, and thus the fund being forced to allocate significant capital to the Chinese stock markets, at a time when the gloves between the two nations are clearly off.

Needless to say, the optics of the US halting capital from entering China would be staggering and could result in a reversion of China-bound capital flows across all Western countries until the current war of words between Trump and Xi rages. The only problem is that, as we noted yesterday, this particular war of words could last a long time, since there is no longer any impetus to kiss and make up, and if anything, Trump will only escalate the anti-China sentiment into the election (and after), to keep pounding that the collapse resulting from the coronavirus pandemic is not his fault, but rather’s Beijing, even as China pursues a mirror image approach, blaming the US for launching the pandemic.

The most obvious market reaction for now is in Offshore Yuan which has collapsed in the last two days, extending losses tonight…

Of course, much of Asia is on May-Day holiday so liquidity is low, but Yuan’s move is significant nevertheless…

Bloomberg reports that Senator Marco Rubio, a Florida Republican, applauded reports of the move in a statement Thursday.

“It’s outrageous that five unelected bureaucrats appointed by the previous administration have ignored bipartisan calls from Congress to reverse this short-sighted decision, and I applaud President Trump for directing his administration to take swift action preventing this from going forward,” he said.

We would expect China to be furious at this discussion and wonder what they will do to stall this move – one suggestion, given the weakness in US equity futures overnight, is to push volatility back into US markets – to shake the faith in the dramatic market rebound (that The Fed enabled).